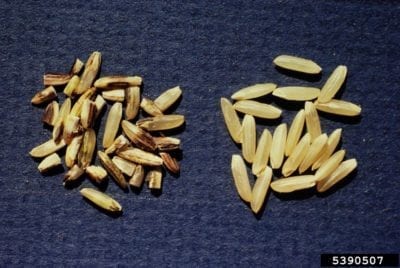 Whether growing a field of rice crops or just a few rice
plants in the garden, you may at some point come across some kernel
smut of rice. What is this and how can you alleviate the problem? Read on to
learn more.

What is Rice Kernel Smut?

Perhaps, you’re asking what is rice kernel smut? The short
answer is it’s a fungus carried by Chlamydospores that may linger and
overwinter, waiting for spring rains to move it to a new home. That new home
often includes panicles of long-grain rice growing in the field where the
fungus exists.

Chlamydospores are the cause of rice with kernel smut. These
settle into rice kernels as they reach maturity. Long grain rice varieties are
most often bothered with kernel smut of rice during rainy and high humid
growing seasons. Areas where rice is fed with nitrogen fertilizer experience
the problem more readily.

Not all long-grain kernels on every panicle are infected.
Completely smutted kernels are not common, but are possible. When totally
smutted kernels are harvested, you may notice a black cloud containing the
spores. Infested lots of grain have a dull, grayish cast.

While this appears to be a common issue with rice crops, it
is considered a minor disease of the crop. It is called serious, however, when Tilletia barclayana (Neovossia horrida) infects rice
panicles, replacing grains with the black smut spores.

How to Treat Rice Kernel Smut

Preventing rice kernel smut may include planting short or
medium grain rice in areas prone to fungus development and avoiding the use of
nitrogen fertilizer to increase crop yield. Treating infections is difficult,
as the fungus is only visible following panicle maturity.

Learning how to treat rice kernel smut is not as effective
as prevention. Practice good sanitation, plant disease resistant (certified)
seed, and limit nitrogen fertilizer to control a present fungus.